The Sci-fi-like Fish That Hibernates Underground 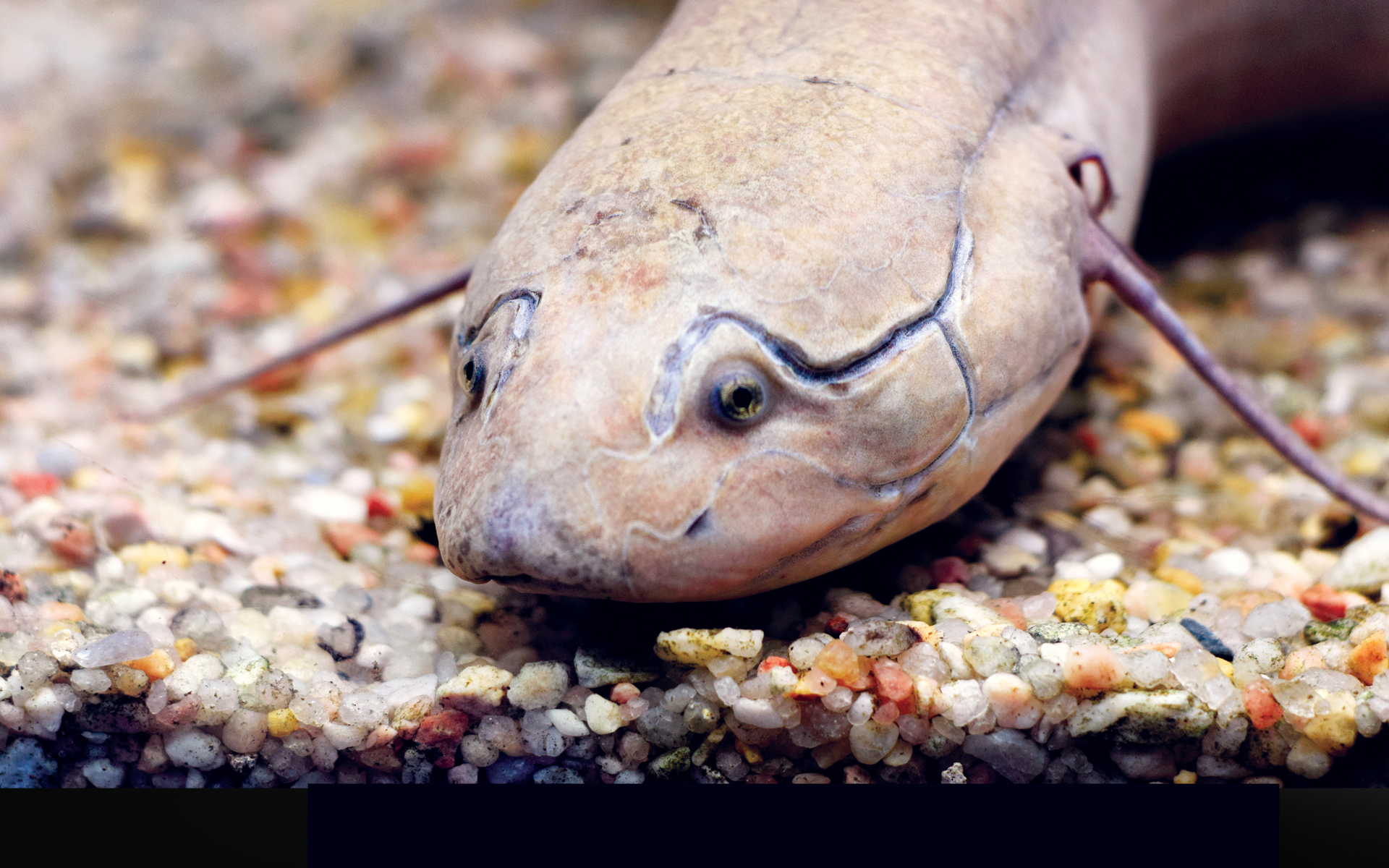 An exceptional oddity occurs in Africa, Australia, and South America during dry seasons: an oval-shaped, cocoon-like structure that is found under the ground which when gently broken open produces a long and curled live fish like something out of a sci-fi movie! One can continue to dig the surrounding area and find hundreds more of these fish peacefully resting under the ground.

This fish, bestowed with life in a cocoon of mud it fashions under the ground, is called the “lungfish.” It has been discovered that lungfish can survive thanks to their wonderful features for several years in cocoon-like pits under extremely severe and arid conditions. The secrets to this amazing phenomenon lie in the fish’s exclusive respiratory system.

While lungs are the respiratory organs for vertebrates that live on land, the respiratory organs known as gills have been granted to most aquatic animals. Lungfish actually breathe through both gills and lungs. This is why they are also known as dipnoid, a special type of “double breathing” species which have one or two lungs next to their gills. These are not actually lungs but are instead air sacs surrounded by capillaries. They function as lungs when the fish need to utilize them. In particular, these sacs are activated when the water in the fish’s environment dries up. Lungfish are able to overcome drought periods that may last many years by remaining buried in mud and breathing through these God-gifted air sacs.

There are six lungfish species known to be living in Africa, South America, and Australia. The fish resembles the eel due to their prominently long and cylindrical body structure. Studies have shown that the African species tend to be the largest and can reach up to two meters in length, while its Australian and South American counterparts can grow up to 1.25 meters. Fossil prints indicate that African lungfish emerged roughly 400 million years ago and are thus often called “living fossils.”

Just as everything is created and equipped in accordance with their exact needs, so is the lungfish. Lungfish do not have dorsal fins. Their chest and abdominal fins have features that make it easier for the fish to crawl on the ground. The fins are long, adhesive, and highly mobile, and their tips have a very delicate sense of touch. Moreover, the fish’s olfactory and taste receptor cells, and its lateral lines that detect pressure and turbulence, have been created to be extremely sensitive. These structures function as senses that support the fish’s weak sense of vision. Additionally, there are electro-receptors on the fish's nose that help it to easily perceive their surroundings and aid with their survival.

As the water recedes during the dry season, each lungfish first digs a tunnel for itself in the slime and settles in it. At the top of the tunnel is a porous cover that allows air to smoothly enter and exit. It is within this tunnel that the fish fashions a cocoon for itself made out of a mucous it spews which is designed to keep moisture and allows air in. After these meticulous preparations, the fish goes into a summer sleep that is similar to hibernation. Its physiology also changes during this period as its metabolic speed is lowered to 1/60 of the normal circumstances and its body functions are brought almost entirely to a halt. The fish spends this whole period in this way until the next rainy season arrives.

The lungfish, no doubt, also need to maintain their energy during this deep sleep. They can generate energy by dissolving a portion of their own muscle tissues as a sort of “fat reserve.” Consumption of muscle tissue as food leads them to lose about 3 centimeters in size during one season, and they also lose almost half of their weight during extensive droughts.

Animals of the underwater world use their gills for breathing. The multi-functional gills are delicately structured to allow the dissolved oxygen in the water to be released into the bloodstream and have the carbon dioxide removed. The gills are also instrumental in several processes including gas exchange, osmoregulation, acid-base adjustment, and nitrogenous waste disposal. A fish normally only has oxygenated blood in its gills. In the fish classified as dipnoid, the extremely thin membrane covering the inner surface of the air sac connected to the circulation system is conducive for gas exchange, thus it helps respiration by acting like a lung.

Different from other species, the lungfish are equipped with a highly developed exclusive respiratory mechanism that enables them to live both in water and on land. While some fish species that can breathe air do so by using basic gas sacs, the system in lungfish is far more complex.

There is a main canal in their breathing organs that serve as a type of de facto lungs, and this canal is surrounded with numerous chambers that increase when expanded but decrease in size. Most chambers have a central space linked with a ventilation duct. The inner surfaces of these structures are lined with numerous honeycomb-like air sacs fed by fine capillaries. A gas exchange occurs in these small vesicles, thus maximizing the surface area on which this gas exchange takes place. Additionally, these fish also have a circulation dedicated to the air sac which functions as a separate lung that is the same as in land vertebrates.

Lungfish go up the surface to breathe and position their heads in a way so that the tip of their nose touches the water’s surface. Meanwhile, they open their mouths and draw air from just above the water. During this process, they usually make a characteristic sound that varies slightly across species. The lungfish in Australia are a little different from the others; they breathe air through their nasal openings while their mouths are closed. In addition, the lungfish in Australia breathe air in shorter periods and they use their lungs only in high activation periods in their natural environment. This is why their gills are very strong since they have only one lung. Due to intense use under severe climatic conditions, the African and South American lungfish have two lungs instead of one and their gills are much smaller than that of other lungfish.

With unique features bestowed to their respiratory system, lung and gill structures so they can survive under extreme conditions, lungfish are a treasure for us to think and marvel on the mysteries found in nature.