The Sun: How Much Do We Know About Our Heavenly Lamp? 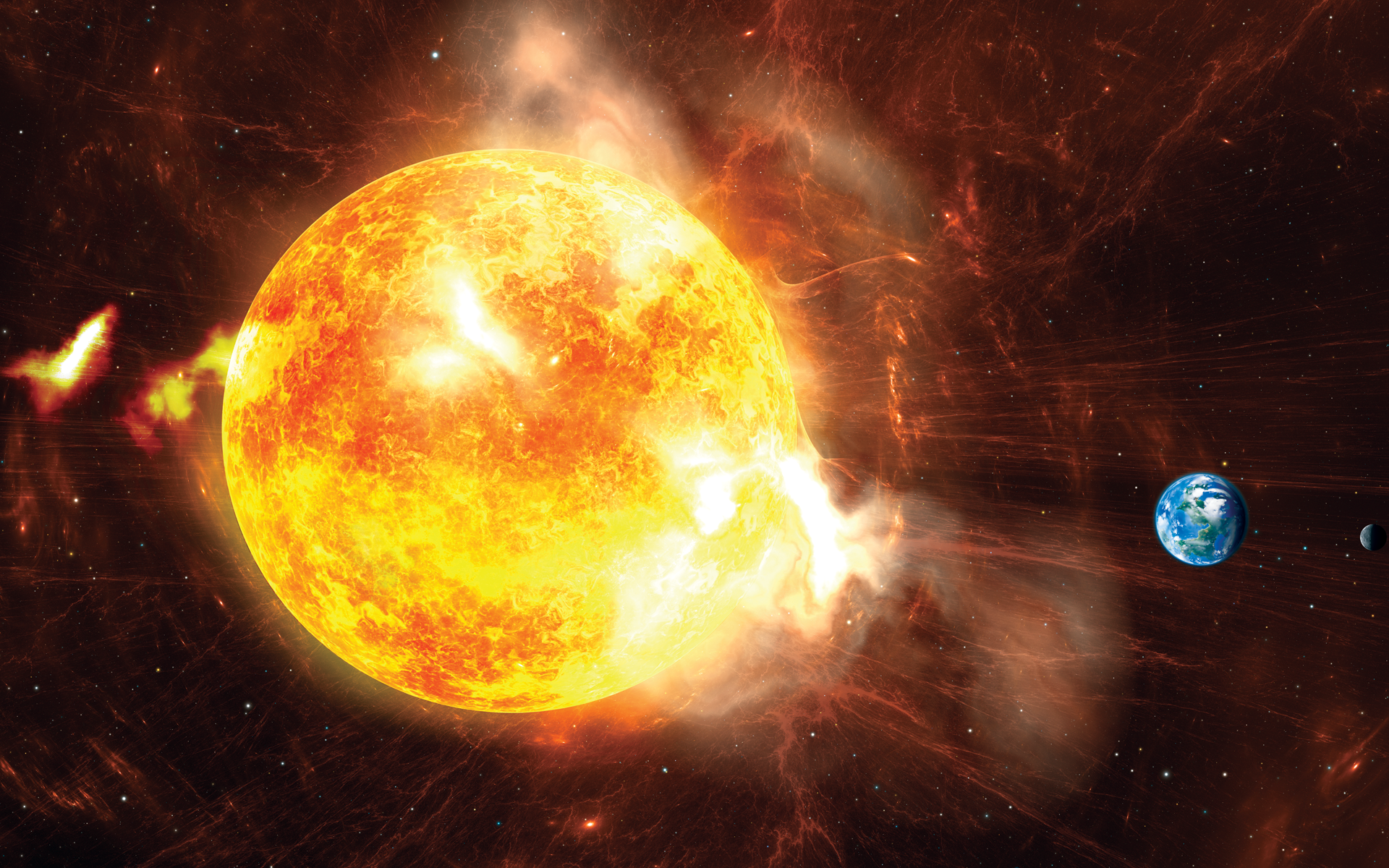 “Two things fill the mind with ever new and increasing admiration and awe, the more often and steadily we reflect upon them: the starry heavens above me and the moral law within me.”
Immanuel Kant

Since the very beginning, humankind has been probing the universe and standing in awe as we learned more and more about it, thus increasing our curiosity even more. Each discovery has revealed how little we collectively knew and has helped to showcase the marvelous creation of the universe.

In December 2019, the Daniel K. Inouye Telescope (DKIST), the world’s largest solar telescope, started capturing the highest-resolution images of the Sun that were ever taken. The motion on the surface of the Sun was observed in detail, and the magnificent image of millions of solar flares, each much larger and more effective than any volcanic eruption on Earth, enthralled scientists.

With its myriad of features such as its location, size, energy, and structure, the Sun is an indispensable resource for Earth. This source of heat and light was most likely created approximately 4.6 billion years ago to set the Earth ready for all the living things that were going to come much later.

It is a known fact that the Sun has a major role among all causes on which all life on Earth is dependent on. In fact, this is exactly what makes the Sun unique, or else it is just one of the billions of stars in the Milky Way. For instance, there would be no plants since photosynthesis is triggered by energy from the Sun. Processes that are crucial to the maintenance of the environment, such as water circulation, i.e. evaporation of water from the seas and oceans and its downpour elsewhere would not be possible. Winds would also not occur as they are caused by differing temperatures in the atmosphere. Without the Sun as the apparent cause of many vital processes, seasons would not emerge in the world, nor would the formation of vitamin D in our bodies would be possible. Of course, all of these phenomena are within the frame of the laws of creation, and our Lord can also create without cause or reason.

While the Sun is 26 thousand light years far from the center of the Milky Way, its distance from the planet Earth is about 150 million km, which equals 8 minutes and 31 seconds at the speed of light. In other words, we are unable to watch the Sun live but can witness how it looked 8 minutes ago.

The Sun, normally a white, medium-sized star, appears yellow due to the Earth’s atmosphere. It is comprised of 91% hydrogen, 8.9% helium, 0.1% carbon, and other elements such as nitrogen. It is one of the stars we otherwise see during a clear night sky.

While the Sun is enormous in comparison to the size of Earth, it is a relatively small celestial object when compared to the size of the Universe. Our solar system consists of eight planets, several moons, numerous asteroids, and the Sun. The Sun, the heaviest and largest celestial body in the system, is 600 times larger than the total volume of all of the system’s planets. Equaling 99.8% of the total weight of its system, the Sun definitely generates a huge gravitational force which causes the other celestial objects to orbit itself. There is a perfect balance between the gravitational force of the Sun and the centrifugal force of the planets. If the rotational speeds of the planets were slower, they would quickly be pulled towards the Sun and consumed.

The Sun is a huge ball of flame with the temperatures of 5-6 thousand degrees Celsius on its outermost shell and 15-16 million degrees Celsius at its core. Its surface is in perpetual motion due to the convective movements triggered by the heat from its core [1]. Due to consecutive explosions and stirs that result in a kind of “plasma soup,” there is no fixed temperature on the Sun. The concentration of the surface magnetic field in certain regions prevents a purely homogeneous heat distribution. This is how the “sunspots” – dark-colored areas on the Sun’s surface – are formed.

Movements of the Sun

As stated in the Holy Qur’an, the Sun moves on an orbit. While the Sun rotates around itself, it also travels towards Vega, a star 25 light-years from the Earth, at a speed of 220 km per second. The Sun completes a tour of the galaxy in about 230 million years.

The Sun rotates around itself at an average of 70 thousand km. Since it is in plasma form, the Sun moves at different speeds in different regions. The equator region completes one cycle in 25 days, while one cycle of the pole regions takes 35 days. The interior of the Sun is extremely volatile: A French research group led by Prof. Laurent Gizon examined the seismic sound waves in the Sun and discovered that the core of the Sun rotates 3-4 times faster than its other regions [2].

Similar to that of the Earth, the Sun has magnetic north and south poles that are in perpetual motion. These poles shift places every 11 years.

Reactions in the Sun

It is estimated that the hydrogen fuel of the Sun, which is counted among the middle-aged stars, will end after 6.5 billion years and thus send it to an utter collapse within itself which will result in it becoming a small star called a “white dwarf.”

The central region of the Sun undergoes intense pressures due to gravitational force. These pressures cause nuclear fusions and the energy produced through radioactive reactions in the Sun reaches to the Earth as light and heat. Every second, 564 million tons of hydrogen turns into helium, while approximately 4.5 million tons of material turn into energy and radiates into space.

Simply put, there are 400 billion 1-megaton strong nuclear explosions happening at any moment in the Sun. Moreover, the energy the Sun produces in one second is 6.1 million times more than that of the atomic bomb dropped on Hiroshima. Only one in 2.2 billion of the energy the Sun emits in space reaches the Earth and ends up catering to the needs of living beings.

Mercy rather than disaster

Particles that escape from the corona layer of the Sun, which perpetually moves with nuclear explosions with a temperature of about 1 million degrees Celsius, are dispersed into space. This wind of charged particles is emitted from the Sun in every direction at a blazing speed of 400 meters per second. This magnetic breeze called “Solar Wind” impacts the magnetic field of the Earth and causes storms in the magnetosphere layer of the atmosphere.

Fortunately, our planet Earth is protected by a magnetic shield, which deflects these harmful rays from the Sun to the polar regions.

The magnificent view of the polar lights of blue, red and green colors called “aura” in both poles is caused by the collision of the magnetic field waves from the Sun with the Earth’s atmosphere. This wonderful natural light show mostly takes place at the poles because the north and the south poles are the zero points of the Earth's magnetic attraction where charged particles intensely enter the atmosphere.

Large enough to house 1 million and 300 thousand Earths in itself, the Sun works like a giant nuclear reactor in which radioactive events take place with such subtle calculations that scientists cannot yet fully explain. This is a miraculous phenomenon, for normally, it is not possible for four positively-charged hydrogen atoms – which normally move around randomly – to come together and form helium.

Fusion radioactive chain reactions in the Sun continue as follows:

First, while two hydrogen (1H) particles join, “deuterium” (2H) – which has a proton and a neutron – as well as positron and energy are created. Thanks to another hydrogen reacting with deuterium, a helium isotope with a neutron and gamma rays are formed. The reaction of this helium with similar helium particles results in the formation of two-neutron helium and two hydrogen atoms.

The force that fuses the two separate atomic nuclei that hold deuterium together is called “strong nuclear force.” The nature of this force cannot be fully explained. Theoretically, it is said to be generated through the back-and-forth movement or effect of a particle called “pion” between the protons. This force is the greatest physical force in the universe and is 1036 times stronger than the force of gravity. Thanks to its power, this force is capable of fusing two hydrogen nuclei that normally repel each other with great force.

If this force was weaker than its current level, it would not be able to hold two hydrogen nuclei together. Any two adjacent protons would repel each other immediately, and the nuclear reaction in the Sun would end before it started. That is, the Sun would never exist.

What if the strong nuclear force was a little bit stronger?

George Greenstein explains that if this great force was a bit stronger, then the Sun would change completely, for the first stage of the reaction in the Sun would then be the production of di-protons, not deuteron. The weak nuclear force would be reduced to null and only the strong nuclear force would remain in the loop. In that case, the Sun’s fuel would immediately become so disproportionately effective and massive that the Sun and all similar stars would be blown to smithereens in a matter of seconds [3].

Yet, this is not so. The Sun has been set into motion as the main source of life on Earth, located millions of kilometers away.