When we think of tears we generally think of the emotional implications behind them, such as why a person is crying in the first place. This is certainly one of their important functions, however tears are much more useful than meets the eye.

Tears play a significant role in maintaining the vital activities of the eyes and the cornea, a tissue with a high capacity for regeneration that does not contain any blood vessels despite the huge number of nerves it possesses along with the fact that roughly 75 to 80 percent of its weight is water. Tears also assist adjacent tissues by serving as a barrier against external agents that can cause infections and thus help ensure visual acuity. Additionally, they are a source of growth factors, vitamins, neuropeptides, and other substances that are required for the development and growth of the cornea's epithelium, a transparent structure without any vein that is located in the front of an eye.

At first glance, tears may appear to be simple water droplets. However, they are actually jelly-like liquids that protect the eyes and contain electrolytes, water, mucin, vitamin A, antimicrobial proteins, immunoglobulins, and growth factors [1]. They are often secreted involuntarily as a result of stimulation of ocular surfaces and nasal mucosa, and a person is capable of producing a daily average of 10 ml of tears. A significant proportion of tears is lost via evaporation or absorption by the nasolacrimal system, which is a highly sophisticated system, whose functions are not fully known yet, that serves as a pipeline for carrying tears away so that they do not overflow from our eyes [2]. Tears also have antimicrobial, nutrient, and optical characteristics. A lack of sufficient tears disrupts this balance and may lead to damage to the epithelial tissue. The production of tears may decline due to aging, sleep, anesthesia, decreased nasal sensitivity, Dry Eye Syndrome (DES), or the development of keratoconjunctivitis sicca (KCS) [3].

DES results in dry eyes due to the declined production, or increased evaporation, of tears or damage to ocular surfaces [4]. Its symptoms include irritation, a stinging sensation, blurred vision, and low vision. DES is more frequent among people aged above 65 and women under normal conditions.

In primary care, DES is treated with artificial tears. However, artificial tears contain insufficient amount of oils and may therefore increase the rate of evaporation among existing tears because they fail to provide proper epithelial regeneration and repair. For this reason, a search for more effective treatments is underway. Just as breast milk is crucial for babies and cannot be replaced by instant formulas, natural tears are equally valuable for ocular surfaces. In this context, there are ongoing efforts to produce alternative tears by using other body fluids such as blood, breast milk, hyaluronic acid, and umbilical cord blood.

It may seem odd, but blood is the first body fluid that comes to the mind of researchers in their search for producing alternative tears as it contains many nutrient and therapeutic substances. Autologous serum produced from one's own blood was proposed for use due to its having a similar content to that of natural tears. Treatment with autologous serum was first introduced by Ralph et al. in 1975 [5]. Fox et al. then reported positive results in 1984 for the use of autologous serum in treating dry eyes [6], however its clinical application was performed by Tsubota et al [7].

Tsubota argued that autologous serum was more advantageous than other fluids as the risk of transmitting diseases was lower. Tears made from umbilical cord blood and bovine serum were also used for this purpose, but they were not considered as safe or practical due to the risk of infection and allergic reaction [8]. The serum contains IgG, substances with antibacterial effects such as lysozyme, vitamin A, albumin, α2 macroglubulin, platelet-derived growth factor 19 (PDGF), and many other substances that have nutrient effect on epithelial cells [9]. All of these substances are found in greater quantities in autologous serum than tears, and therefore blood products such as autologous serum obtained from the same person, or from first degree relatives, are a good option in the search for the perfect alternative tear.

Upon taking a closer look, the method of treating DES with autologous serum is a much older method then one may expect. There are famous folk stories in which people dry out their tears or lose their sight due to excessive crying from sorrow. The Book of Dede Korkut contains such stories [10]. For instance, “Bamsi Beyrek of the Grey Horse" narrates the story of Bamsi Beyrek who was taken captive and people could not receive any news of him for a long time. Later, when the news of his death came his father Prince Püre cried so much that he eventually lost his sight. Years later, he learned that his son had not died and returned.

“To know if he is really my son, let him make his little finger bleed and wipe the blood with a handkerchief, and let me rub it on my eyes, and if my eyes regain their sight, then he is really my son Beyrek,” said Prince Bay Püre. When he rubbed the handkerchief on his eyes, he regained his sight by the divine power of God” [11].

The eye disorder which Prince Püre suffered from in this story is indeed DES. The story describes how a blood product is applied locally to the ocular surface and as result, vision is regained. There is a wise purpose in telling Bamsi Beyrek not to make his little finger bleed directly onto his father's eyes. The blood congealed and the clotted blood remained on the handkerchief. The blood without the clot (serum) was filtered on the other side of the handkerchief, and this serum became the cure of the disease. According to the story, if this serum works, it proves the blood is from the bloodline of the ill person, i.e., from a first degree relative.

A similar story can be found in Sura Yusuf of the Holy Qur’an. Prophet Jacob, upon whom be peace, cried extensively when his son, Prophet Joseph, upon whom be peace, disappeared after he was cast into a well by his brothers, abducted by a caravan, and then taken to Egypt. As described in the Qur'an: "He turned away from them and said: 'Alas, my grief for Joseph!' And his eyes turned white because of the grief" (Sura Yusuf, 12:84). The following verses describe how Prophet Joseph sent his sweat-soaked shirt to his father Prophet Jacob, who regained his sight upon rubbing his son's shirt on his eyes: "Go with this shirt of mine, and lay it over my father's face, and he shall recover his sight" (Sura Yusuf, 12:93). "But when the bearer of the good tidings came (with Joseph's shirt), Jacob laid it over his face and he regained his sight" (Sura Yusuf, 12:96). 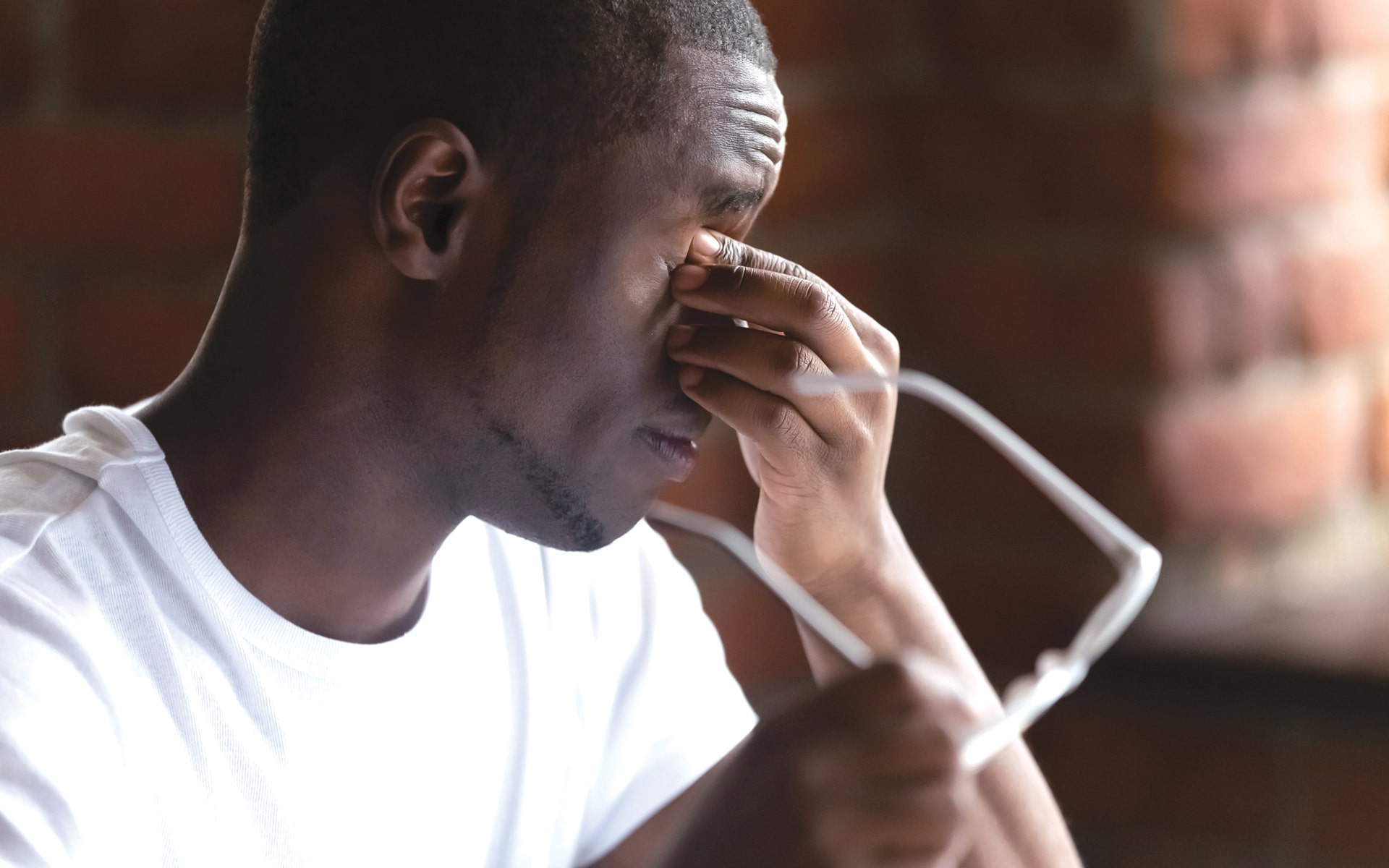 Prophet Jacob regaining his sight after applying Prophet Joseph's sweat-soaked shirt locally onto his eyes implies that sweat may serve as an alternative to tears.

Human skin has an average of 2.6 million sweat glands and 99 percent of sweat is water. Research demonstrated that the sweat of healthy people had a different smell than that of ill people due to volatile organic compounds in sweat. Everyone’s sweat has a unique smell depending upon their health, emotions, and diet. The mixture of 373 volatile compounds in sweat makes it as unique as a fingerprint. In 2013, a Swedish engineer developed a machine that can turn sweat into water and showed that one could obtain a mouthful of water from a sweat-soaked shirt. It is known that the antibacterial protein structure called dermicidin in sweat is crucial in preventing bacterial activities and fighting infections.

Researchers may find inspiration from how Prophet Jacob regained his sight thanks to a sweat-soaked shirt, Prophet Joseph's smell, and the therapeutic content in it considering the above-mentioned characteristics.