Amazon: The Lungs of Our Earth 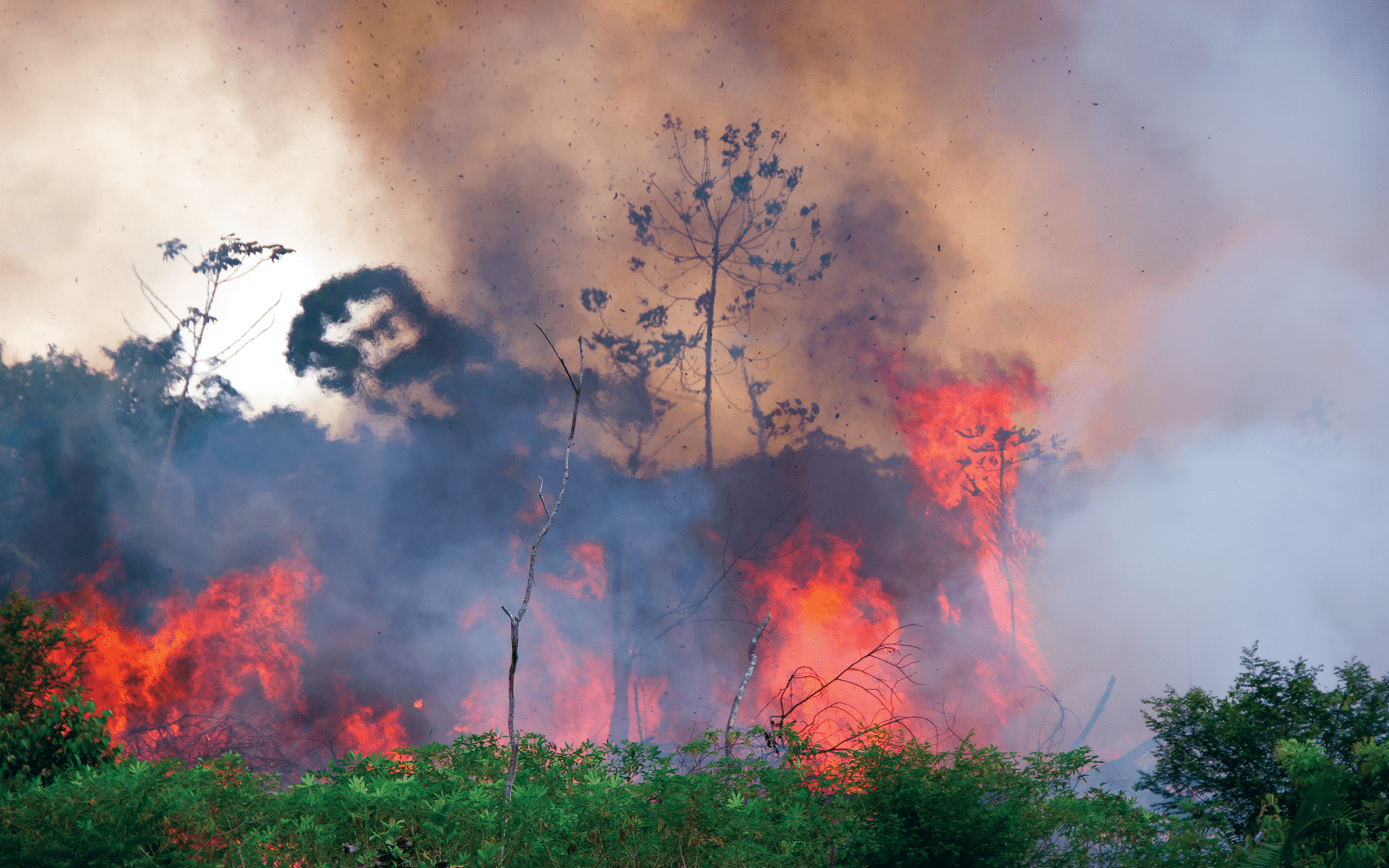 Beginning in July of 2019, the Brazilian Amazon rainforest has been up in flames, burning up the lush foliage and engulfing much of the wildlife, along with many Indigenous groups, in its fiery wake. Yet, it’s receiving little to no media coverage due to the global community’s seemingly unconcerned liability to take action. Greenpeace, the international environmental organization, is holding Brazil’s current government under President Jair Bolsonaro responsible as the primary cause of the fires due to negligence. They claim that mass deforestation has been taking place at an increasingly alarming rate, especially following Bolsonaro’s election, and farming and ranching that have also been taking place in surrounding areas have been contributing to the rise in destruction as well (Greenpeace 2019) [1]. These problems have not been addressed in a timely manner.

Various ideologies, such as Dualism, have been heavily promoted within the past few centuries have also shifted humanity’s conscious to one that is less ecologically friendly and more materially greedy. Without help from the international community and the government of Brazil, the Amazon will continue to be subjected to destruction [1].

The Amazon is a massive area, covering roughly 2,300,000 square miles of South American land. It is one of the most important and critical components of the Earth’s delicate ecological balance and to date 2,240,000 acres have been burned due to the 2019 wildfires (in addition to the great amount of damage that has already been done). It is responsible for atmospheric oxygen composition and cleanliness, maintaining the atmosphere’s water cycle, and for the preservation of many rare animal and plant species. Much of the vegetation in the Amazon also includes important medicinal plant species that can be used to cure a multitude of illnesses and diseases [7].

Deforestation, which has plagued the Brazilian Amazon for decades now, is utilized for the establishment of farms and ranches, which has tripled the number of cattle present in this area and surrounding regions (Dwyer 2019) [2]. Farming and ranching have caused more pollution and the poisoning of, not only the lands in these areas, but the entire well-being of our Earth and atmosphere as a whole. Production of methane from cattle and other pollutants are consequential of farming and ranching, and contribute greatly to fire susceptibility of the Amazon. The fires have spiked in these areas where deforestation and pollution are at their peaks (Dwyer 2019) [2]. When it comes down to it, the Brazilian government, in general, expresses lesser concern, even though they make it apparent that they “may look into measures to combat these fires” (Greenpeace 2019) [1], it seems politics is snaking its way into crisis affairs and impeding them once again instead of acting upon them with optimism. [2]

In the past, Brazil was much more involved in helping to prevent deforestation in both public and private lands of the forests. In 2006, the government passed the Public Forest Management law. This law established concessions and funding for forest conservation and regulations involving deforestation in public areas of the forest. Other organizations and institutions that were established following this law being passed included CONAFLOR (a civil society forestry board), IMAZON (an NGO that monitors deforestation), FUNBIO (an environmental fund that budgets financing towards protected lands and biodiversity), INPE (a Brazilian space observation company that also monitors deforestation), and lastly IPAM, a governmental research institution that focuses on deforestation, climate change, and natural resources in respect to the Brazilian environment (Yale 2019) [10]. Indigenous individuals and tribes within the Amazon, along with private property owners, have also gone to great lengths to prevent deforestation and have made the most difference and impact in doing so (Yale 2019) [10]. It was ultimately a grassroots movement of people standing shoulder-to-shoulder, and not a specific government agency, that was able to make the most progress to preserve much of the Amazon’s beauty and help stave off deforestation [5].

Despite the efforts that have been exerted into the establishment of laws, policies, and government organizations in order to protect the Amazon, protection of the Amazon has been much neglected for now and for future generations. Other countries, such as the United States and the United Kingdom, also believe that Brazil is not doing enough. But, President Bolsonaro seems to have many political reasons to continue to resist international help to halt the fires and stop deforestation. His outspokenness of his pro-deforestation views has ignited a wave of eager ranchers and farmers to continue, and even escalate, their destruction of the Amazon (Specht, 2019) [9].

As for religious and spiritual views of the environment, some people have manipulated various religious teachings to promote negative ideologies and views of the environment rather than positive ones. These ideologies argue that all animal and natural life was created to serve mankind, and that humanity has no responsibility to take care of our planet or maintain a balance of life in the natural world. The Indigenous people of the Amazon, such as the Xingu tribe, view these perspectives as “predatory” and are in fear that everything they know and love will be taken away from them due to the utter destruction, negligence and lack of aide provided by the government. Many leaders of these tribes call these events the “destruction of Mother Earth” and the fires that have been set ablaze are Mother Nature’s calls for help (Johnson 2019) [5]. To provide more of a visual, there are roughly 817,000 individuals in Brazil who self-report themselves as indigenous, and there are 67 known tribes within Brazil that do not have contact with the outside world as of now. The Amazon serves as these tribes’ livelihood. Many individuals who are a part of these tribes were born in the rainforest, grew up in the rainforest, hunt in these forests, and make their living in these forests; Amazon is all they know and love [5].

In an article titled “Dualisms - Environmental Humanities", Dualism is outlined as one entity being viewed as "genuine and superior" while all other life is categorized as "other". This concept has had major impacts on the way we as humans view the products of our environment. Dualism fuels the idea that the environment, and all non-human living beings within it, are put on this Earth specifically to serve us as humans and us alone. This ideology allows people to infer that there is a distinct separation between humans and every other living being on the planet, and that these distinctions make it possible for humans to justify destructive actions towards the environment. In addition to these ideas, the concept of "ecological consciousness" is found to play an important role in the relationship between religion and in being mindful of our consumption of our environmental resources, as we continue to consume them faster than they can regenerate themselves (Andrew 2019) [3].

Christianity and Islam are two religions that promote ecological consciousness and believe that the Earth’s resources should be treasured and treated with respect. This places a strong emphasis on environmental protection and environmental rights, which thus encourages followers and believers of the religion to do the same. Religion provides us with morals and values that can be adopted when it comes to our views of all other living things whom also share this Earth with us; not only our views of these beings, but how we treat these beings as well. Finally, Christianity and Islam argue that “being a servant of God” also encompasses the idea that Man must protect what God has entrusted him with, the environment included (Pahl 2018). Specifically in regards to Islamic views, Tawhid, meaning the “oneness of God”, is a critical component that Islam bases itself upon. The religion of Islam, like Christianity and Judaism, is a monotheistic religion, meaning that these religions base their values and morals on the belief that there is only one God. All existence, including the human beings, are His creation, and in that sense they are part of the one same whole and exist interdependently [4][9].

Despite the disregard of public outcries, there are ways that everyday individuals, such as ourselves, may combat this issue head on and on our own without aide from government agencies. Our first mission should be to make this issue as public as possible. Share as much reliable news coverage as you possibly can and spread the word as far as it will go.  If you are able, donate to wildlife conservation and forestation projects held locally or online. Spread knowledge and education. Call attention to higher powers. Other ways in which the everyday community can make a difference include supporting Indigenous groups and tribes residing in the Amazon; begin developing an allyship by using less paper and wood products, by consuming more ethically sourced foods, by voting, and by challenging large corporations who are impeding on the health improvement of the Amazon [8].

Let's take action! The Amazon, its people, and its wildlife need the world’s cooperation, or they do not stand a chance against the ravenous gluttony that is deforestation. We can save the lungs of our Earth together.